Dr. Chua is known as a pioneer in 3 major research areas, namely, nonlinear circuits, chaos, and cellular neural networks. His work in these areas has been recognized internationally through numerous major awards, including 12
honorary doctorates from major universities in Europe and Japan, and 7 USA patents. He was elected as Fellow of IEEE in 1974, a foreign member of the European Academy of Sciences (Academia
Europea) in 1997, and a foreign member of the Hungarian Academy of Sciences in 2007. He was honored with many prestigious awards and prizes, including the IEEE Browder J. Thompson Memorial Prize Award in 1972, the Frederick Emmons Terman Award in 1974, the IEEE W. R. G. Baker Prize Award in 1978, the Frederick Emmons Award in 1974, twice winner of the IEEE M.E.Van
Valkenburg Award (1995 and 1998), the IEEE Neural Networks Pioneer Award in 2000, the first IEEE Gustav Kirchhoff Award in 2005, the IEEE Vitold Belevitch Award in 2007, and the Guggenheim Fellow award
in 2010 and a Leverhulme Trust Visiting Professorship in 2011.
Dr. Chua is a Recipient of the top 15 most cited authors Award in 2002 from all fields of engineering published during the 10-year period 1991 to 2001, from the Current Contents (ISI) database. Dr. Chua has authored more than 500 papers and 8 books. He is widely recognized as the father of nonlinear circuit theory and cellular neural networks (CNN). In 1971, he postulated a fourth basic circuit element call the memristor, which has recently attracted worldwide interests from
industry and academia after hp published a physical nano memristor device in Nature in 2008. Dr. Chua also invented a five-element electronic circuit for generating chaotic signals.
Widely known as the Chua Circuit, it is used by many researchers to design secure communications systems based on chaos and has become a standard paradigm for teaching chaos in textbooks on nonlinear dynamics.
Dr. Chua is the editor of the International Journal of Bifurcation and Chaos. 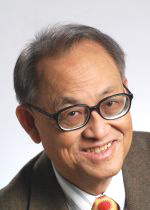