Chris Chafe is a composer, improvisor, and cellist, developing much of his music alongside computer-based research. He is Director of Stanford University's Center for Computer Research in Music and Acoustics (CCRMA). At IRCAM (Paris) and The Banff Centre (Alberta), he pursued methods for digital synthesis, music performance and real-time internet collaboration. Online collaboration software including jacktrip and research into latency factors continue to evolve. An active performer either on the net or physically present, his music reaches audiences in dozens of countries and sometimes at novel venues. A simultaneous five-country concert was hosted at the United Nations a decade ago. Gallery and museum music installations involve sonifications resulting from collaborations with artists, scientists and MD’s. Recent work includes the Brain Stethoscope project, PolarTide for the Venice Biennale, Tomato Quintet for the transLife:media Festival at the National Art Museum of China and Sun Shot played by the horns of large ships in the port of St. Johns, Newfoundland.
Chafe's "Extensions to the 2D Waveguide Mesh," is a physical modeling approach for thin-plate acoustics which will be presented at the 2019 International Conference on Sound and Vibration. The methods include efficient modeling of non-linearities in stiff plates and a new radiation technique through wavefield synthesis which allows the simulations to interact plausibly with room acoustics. Chafe demo'ed "Jacktrip on Raspberry Pi" at the Linux Audio Conference 2019 using a network of 4 devices (each costing < $100) in a playable, distributed, real-time drum surface mesh structure.
Chafe's "Browser-based Sonification" framework for data sonification was also presented at Linux Audio Conference 2019. With the new JavaScript version of his software, the only requirement for participation in his sonifcation workshops is a web browser. Workshops fpr scientists and other interested individuals and artists are ongoing. His sonifcation research led to co-founding Ceribell, a medical device company providing tools for rapid detection of seizures using real-time brain wave sonfication. The "Ice Core Walk" sonification plays the last 800,000 years of carbon dioxide and temperature data in a 35-minute piece meant to be listened to while walking 3 kilometers (the length of the Antarctic ice cores from which the data was collected).
His composition, A Day in the Sun, has been recorded by flautist Margaret Lancaster with video by Greg Niemeyer. Upcoming concerts of other new pieces will be held in Berlin and Vancouver in the coming year including the "Earth Symphony," a collaboration with environmental scientists in Canada. 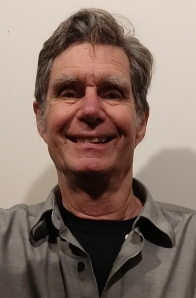