I am the UK's most experienced sea ice scientist, with 49 years ofresearch on sea ice and ocean processes in the Arctic and the Antarctic . This has focused on expeditions and measurements in the field, which have involved 54 expeditions to both potar regions, working from ice camps, icebreakers, aircraft, and, uniquely, navy submarines (6 submerged voyages to North Pole) . My research group in Cambridge has been the only UK group with the capacity to carry out
field work on sea ice. I am the author of more than 320 publications on dynamics and thermodynamics of sea ice, sea ice thickness, waves in ice, icebergs, ocean convection and kindred topics. I am now Emeritus Professor of Ocean Physics at the Department of Applied Mathematics and Theoretical Physics in Cambridge University , and my European Union-funded research is carried out at the Università Politecnica delle Marche, Ancona . I was also recently (calendar
year 20 17) Green Scholar at the Scripps Institution of Oceanography, La Jolla, California . I began my research career at the Scott Potar Research Institute, Cambridge University , where I roseto become Director. I have also held visiting professorships in Tokyo (National Institute of Potar Research), Monterey (US N ava! Postgraduate School), Seattle (University of Washington) and La Jolla. I was coordinator of severa! European Union Arctic flagship projects (ESOP, Gr.eeniCE, CONVECTION and others) and was on the Steering Committee ofthe recently completed EU ICE-ARC project as well as major US Office ofNaval Research initiatives in the Arctic. I served eight years on the Scientific Committee ofthe European Environment Agency and served on panels ofthe National Academy of Sciences (USA). In 1990 I received the Italgas Prize for Environmental Sciences, and was also awarded the Potar Meda! (UK) (1987) and the W .S. Bruce Prize ofthe Royal Society ofEdinburgh . I ama Member ofthe Finnish Academy and a Fellow ofthe Royal Geographical Society.

My book "A Farewell to Ice" documents the ways in which the retreat ofsea ice in the Arctic generates feedbacks which impact the entire global climate system. I contend that catastrophic consequences cannot be avoided without making an all-out effort to develop ways of directly capturing carbon dioxide out ofthe atmosphere, and my next book is on that topic

My current main topics ofresearch are sea ice thickness, dynamics and role in climate change. I have pioneered the use of AUVs (autonomous underwater vehicles) under sea ice, using multibeam sonar to map bottom features, work which in the pastI also did from UK submarines . Most recently I have been using small AUVs to run under individuai ice
floes and map their botto m shapes, especially shapes of pressure ridges, with a link to surface topography measurements
by laser, giving a complete 3D view of a floe. I am also working on the interaction of waves with sea ice in the Beaufort Sea, since the summer retreat of sea ice now provides enough open water to allow large waves to be generated which may accelerate the rate of ice loss. My work has included wave buoy measurements from a ship and the deployment of automatic wave buoys over the entire Beaufort Sea, transmitting by satellite .

My book "A Farewell to Ice" was published in 2016 and as well as appearing in the UK and US, has been published in Italian (Addio ai Ghiacci), Dutch, Chinese, Mandarin , Japanese and Korean, with a German edition awaited. I continue to study the retreat of sea ice and its global feedback implications . 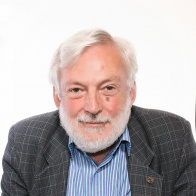