In October 2011, the Politecnico di Torino formally adhered to the Human Resources Strategy for researchers (HRS4R) launched by the European Commission to support research institutions and funding organizations in the implementation of the European Charter for Researchers and the Code of Conduct for the Recruitment of Researchers in their policies and practice. After completing the process of adjustments required by the new national university regulation and internal institutional changes, the Politecnico started the Human Resources Strategy for Researchers (HRS4R) process in January 2013.

After the approval of the Gap Analysis and the two-year Action Plan by the Academic Senate and the Board of Governors, in October 2013 the documents were sent to the European Commission for accreditation.

In November 2013, the European Commission awarded the "HR Excellence in Research Award", highlighting the extremely in-depth and wide-reaching work undertaken by the Politecnico di Torino and its strong commitment to investing in HR strategies.

In December 2015, two years after obtaining the Award, the Politecnico di Torino sent the European Commission a self-assessment report on the progress made in the fulfillment of the principles of the Charter and the Code and a new two-year Action Plan, previously approved by the governing bodies. Again, the results of the assessment by the European Commission in January 2016 were very positive, encouraging to continue on this path.

At the beginning of 2018, following the changes introduced by the HRS4R Strengthened process and in agreement with the European Commission, the Politecnico managed the transition from the old to the new enhanced HRS4R procedure and the Action Plan was updated and extended until December 2018.

In September 2018, the preparatory actions started to carry out a new Gap Analysis and to design the 2019-2021 Action plan. Those actions were achieved in coordination with the definition of the new POLITO4IMPACT Strategic Plan (2018-2024) and thanks to the contribution of the various members of the academic community and administrative staff. In July 2019, the new strategy for the fulfillment of the principles of the European Researcher Charter for the period 2019-2021 was approved by the Academic Senate, upon favorable opinion of the Board of Governors. In February 2020, the governing bodies approved the Action Plan of the  Strategic Plan, which confirmed the actions of the Charter and Code as a priority.

On 14 April 2021, the Politecnico di Torino received the site visit of three experts sent by the European Commission for the reconfirmation of the HR Excellence in Research Award. During the day, which took place remotely due to the COVID-19 emergency, the experts interviewed online more than 60 members of the Politecnico community - including researchers, administrators and institutional representatives - and reviewed more than 70 actions carried out since 2013.

The experts confirmed the HR Excellence in Research Award, giving a very positive assessment: “The whole approach of PoliTO towards HRS4R is admirable. Any issues which have been praised during this assessment are actually models of good practice”.

A solid internal organizational structure has been designed since the beginning to ensure institutional support for the initiative as well as the involvement of representatives of all stakeholders (researchers and administrative staff) and with efficient coordination of activities. This organizational structure is presented in the following diagram. 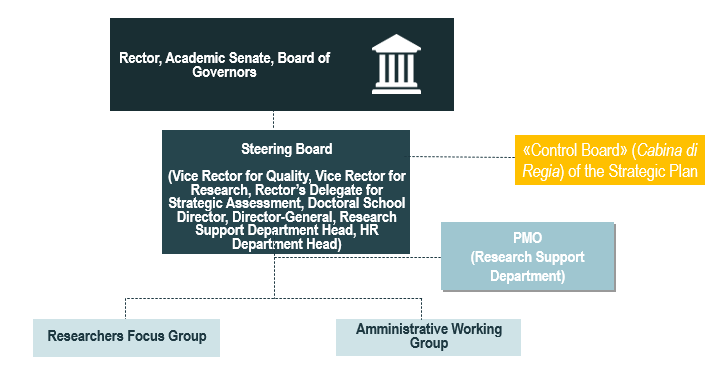 The Focus Group of Researchers was established in 2012 at the beginning of the HRS4R process at Politecnico. It is periodically renovated in order to guarantee an equal representation of researchers categories, Departments and gender. Researchers could express their interest to join the group by answering to the calls that are launched every time a member need to be replaced or addedd. The current composition of the Focus Group is as follows (last update May 2021):

The Administrative Working Group is composed of representatives from the Management Departments from the Central Administration involved in the gap analysis and in the implementation of the Action Plan.

In 2013 and 2018, the Politecnico carried out a detailed analysis to verify to what extent the University policy and practices already in use fulfilled the principles of the Charter and the Code.

The methodology used in 2018 for the gap analysis and the draft of the new Action Plan is the following:

-          consultation of all researchers through a survey;

-          appointment of a Focus Group of Researchers, chaired by the Vice Rector for Quality, Welfare and Equal Opportunities, to analyze the results of the survey and provide suggestions for future actions;

-          appointment of an Administrative Working Group for the analysis of the policies and practices in use;

-          presentation of the results of the gap analysis and the proposals for action to the Steering Board – which is also chaired by the Vice Rector for Quality, Welfare and Equal Opportunities.

Based on the results of the gap analysis and in accordance with the POLITO4IMPACT 2018-2024 Strategic Plan, on 17 July 2019 the new 2019-2021 Action Plan was approved by the Academic Senate, upon favorable opinion of the Board of Governors. 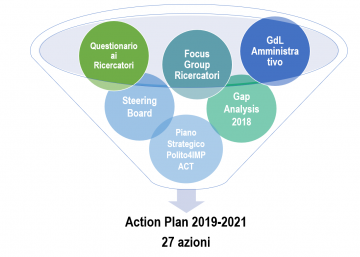 For further information, clarifications or to comment on this text: carta.europea@polito.it