The BIORECAR project proposes an innovative and multidisciplinary approach for in situ “direct reprogramming” of infarcted heart tissue into functional cardiac tissue, using bioengineering tools, including biomimetic biomaterials and nanomedicine.

Around 70–85% of the volume of the adult mammalian heart is occupied by cardiomyocytes, the cardiac muscular cells that allow concerted contractile activity. Myocardial infarction is caused by the obstruction of coronary arteries, resulting in the death of approximately 1 billion cardiomyocytes in the left ventricle in a few hours, with the progressive formation of a fibrotic scar. Fibrotic tissue is mechanically stiffer than healthy cardiac tissue, is mainly populated by cardiac fibroblasts, but lacks beating cardiomyocytes, hence it is unable to undergo contraction.

In BIORECAR I propose a new regenerative medicine approach to recover myocardial functional contractility in the post-infarct fibrotic tissue. The selected approach is based on direct cell reprogramming and integrates nanomedicine, biomaterials science and tissue engineering. The project foresees the design of innovative polymeric nanoparticles, for the targeted reprogramming of cells populating the post-infarct fibrotic scar (cardiac fibroblasts), modifying their gene expression, to convert them into cardiomyocytes. The nanoparticles will be directly administered into the infarcted tissue through an injectable hydrogel, provided with further functionalities to reinforce cell reprogramming. The approach will be validated in an in vitro model of human fibrotic cardiac tissue, then tested in an in vivo model. 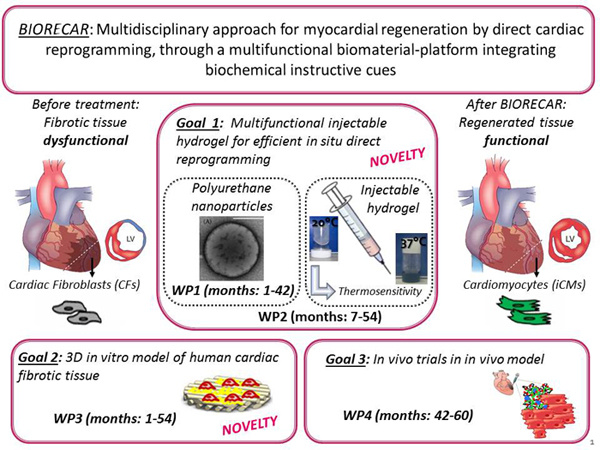 Ischemic heart disease is the current leading cause of mortality and morbidity in the industrialized world with more than 26 million cases worldwide. The only standard therapy addressing the irreversible loss of functional cardiomyocytes is heart transplantation. The development of cardiac regenerative therapies, which is the aim of BIORECAR, is a major clinical challenge with a deep socio-economic impact.

Concerning the scientific impact, the project will open a new multidisciplinary research line in Europe, on direct cardiac reprogramming which is currently studied mainly in the US.

Valeria Chiono is Associate Professor at DIMEAS - Department of Mechanical and Aerospace Engineering of Politecnico di Torino. She has received her Master Degree in Chemical Engineering and Ph.D in Chemical and Materials Engineering at Università di Pisa. She collaborates with a number of Universities like MIT in United States and Cambridge University in the United Kingdom, in the framework of research projects funded by the European Union or other bodies. She is author of more than 88 scientific publications (H-index 24, citations number: more than 1980 – Source Scopus) and co-author of 4 patents. Her research activity is focused on bioartificial biomaterials, with specific attention to regeneration of nervous and cardiac tissues.