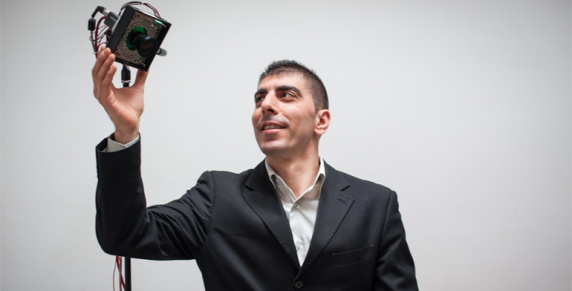 A branch of dimensional metrology concerns the measurement of large-sized objects. The current measuring instruments are generally expensive and sometimes not very well exploited. This project has introduced innovative mathematical/statistical fusion models, which allow an effective use of different instruments, in order to reduce measurement error and set-up time.

Typical industrial applications in the field of Large-Volume Metrology (LVM) are the dimensional verification and assembly of large-sized objects, with important consequences on the functionality and safety of the final products. These applications are generally performed using technologically advanced systems, which are expensive and require time consuming set-up/calibration and measurement operations.

Although several types of LVM systems are (not rarely) available in the same industrial workshop/laboratory, they are often used independently of each other. This is a rather myopic view because it ignores the benefits that may result from the combination of various kinds of systems.

The goal of this project is to introduce innovative mathematical/statistical fusion models, which allow an effective and efficient use of multiple LVM systems, at all stages: design, calibration and measurement. Particularly interesting is the development of a global calibration procedure, which can revolutionize the state-of-the-art procedure, reducing set-up time and improving calibration accuracy significantly. This aspect is confirmed by preliminary studies, using some LVM system prototypes developed at Politecnico di Torino (DIGEP). Due to the undoubted originality and key practical implications, the global calibration procedure will be protected with a patent.

The first part of the project, characterized by the conceptual development of mathematical/statistical models, will be followed by a more practical set of activities, i.e., various experimental tests under typical industrial conditions.

Given the strong practical connotation of the project, its outputs can be translated into potential applications, which allow a more effective and efficient use of multi-sensor LVM systems in various industrial sectors (e.g., aerospace, automotive, rail, marine, wind power, etc.). The greatest practical contribution is to better capitalize on the potential of the LVM systems available, with important benefits as reducing operating time and hardware cost. Applications can be also extended to the academic world, as they may profitably enrich numerous research activities in the LVM field.

The project has mainly developed two kinds of models to measure large-sized objects: a direct model allowing to improve the measurement precision and an indirect method to calibrate at the same time different probes distributed into the volume of the object to be measured. The experimental phase has successively allowed to verify the convenience and the effectiveness of the proposed techniques.